When it comes to phishing documents its 99% of the time Microsoft office documents, since it is so versatile with what you can do. Because of that people often neglect security measures for PDF documents. To be fair, since PDF documents wont allow an attacker to implement handy VBS script which opens a shell in an instant, it is a bit harder to use PDF for phishing purposes. However, one way to do so is by injecting java script into the PDF document.

1) Create a Microsoft word document and tailor its content just as you like. Afterwards export the document as PDF. Alternatively you can just pick any other already existing PDF document.

Header: This is the first line of a PDF document and specifies the version number. To inject java script we do not need to edit anything here.

Body: This is where all the objects of the document are stored. The first line of the body is usually right next to the header and starts with “1 0 obj” to create the first object inside the PDF. Objects contain all the information within the PDF document aswell as the java script that we are going to add. The last line of the body contains “endobj” while the line after that usually starts the cross reference table (xref).

2) Now its time to inject java script into the document. Therefor we add three objects at the end of the PDF body, right before the cross-reference table. Keep in mind that the new objects have to be consecutively numbered. We also have to edit the object number inside the reference table accordingly as shown in figure 3.

The first and the second object are for initialization of the java script and each of them references the next object. The third object contains the actual java script.

3) Since two out of the three new objects are already referencing each other we need to create only one new reference for the first object that we have added so that the object that contains the java script gets executed. To do this we need to edit the root (first) object which is usually at the beginning of the document. The root object begins with “1 0 obj” and contains various information about the document. Within the object we need to add the string “/Names X 0 R”, where X is the number of our first of three added objects, which in our case is 26.

4) The last step is to edit the trailer of the document. The trailer is at the end of the document as figure 3 already showed and contains the total amount of objects within the document. Sometimes there are two trailers. To reduce the risk of failures it is recommended to edit both of them, even though editing just the last one usually works aswell. Since the reference table is our last object inside the document and it is numbered as 29, we have to edit the trailer accordingly as shown in figure 6. For comparison, see the original trailer in figure 3.

After saving everything we are ready to test if everything is working as intended. When we open the document with an Adobe Acrobat Reader we see that the java script gets executed right away, asking for username and password.

After entering a username and password, the java script tries to sent the data to the web server stored inside the source code. With default configuration the Acrobat Reader will display a security warning as shown in figure 9.

If the user accepts the risk, the username and password will be sent to the web server of the attacker.

Alternatively an attacker can inject any other action that java script is capable of executing. For example to trick a user into downloading and executing a binary.

1) Make sure that all applications that you provide for viewing PDF documents within your environment do not allow the execution of java script.

2) Make sure that all applications that you provide for viewing PDF documents within your environment have restricted access or no access at all to the internet and other non-PDF documents. 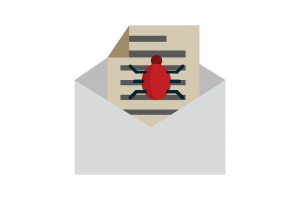